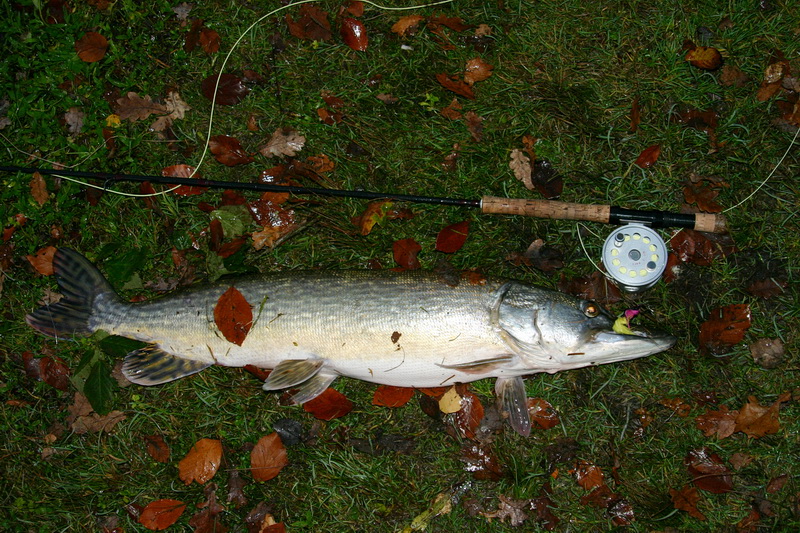 Since I returned from Florida I had to adjust to the local fishing again.
Fall down in the Netherlands means pikefishing.
With the demise of aquatic vegitation due to the changing weather pattern pike become targets again for the local flyfishers.

Yesterday I was on my second piketrip and still eagerly trying to catch the first pike of the season.
The colder weather had made the fish somewhat sluggish so fishing was slow.
Still we probed the usual pikehaunts near brigdes and junctions of canals and streams.

At one bridge I thought I had hooked the bottom, as I started to pull on the line the bottom suddenly moved.
A huge pike had taken the fly and came to the surface.
Unfortunately the hook was not set properly and in a blink of an eye the pike slipped of the hook.
I ended that day pikeless, it was a heartbreaking moment. Today I got a rematch when I fished a location inside the city.
Normally I would do anything to avoid fishing there since I can not stomach the question of bypassers “have you caught anything” repeated every 5 minutes.
So at the end of the day I fished this ornamental pond in the smack of town which I knew held some fine specimens of pike.
After half an hour first signs of live showed when a pike followed the fly right to the bank but broke of the attack at the last minute.
I fished on and past sunset I hooked a substantial pike 15 feet out of the bank. 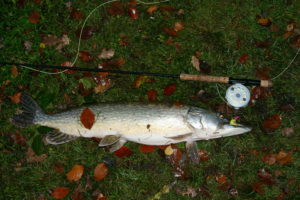 First pike of the season.

The fish dispaced a lot of water when I struck, it raced off towards the middle of pond in an instant.
The fish put up a surprisingly good fight and even jumped clear of the water which was pretty unusual for our local pike.
The streamer was neatly hooked in the corner of the mouth and was released after a quick photo.
It was my first pike of the season and the biggest one I ever had caught, not bad for an urban pond.