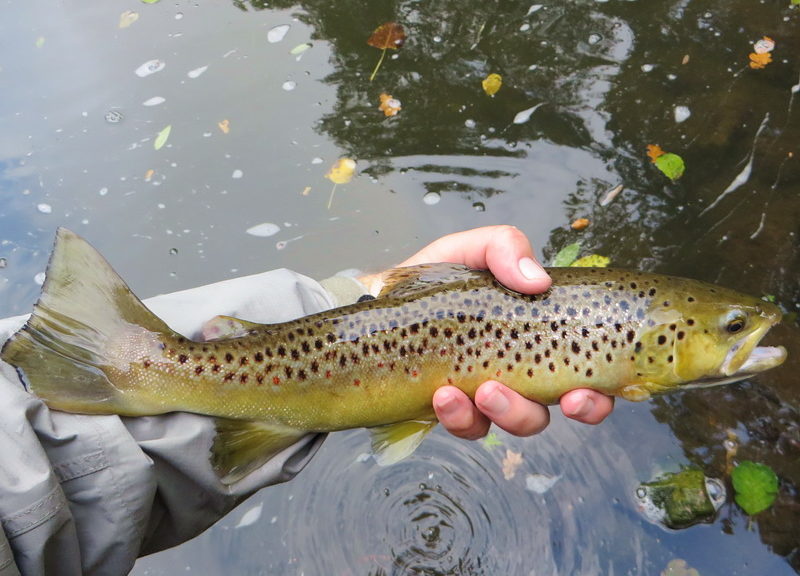 Recently at one of the festivities of our syndicate we got a request to demonstrate our flyfishing skills
as the syndicate manned a booth at a sort of country fair in the village.
The youth department would man the booth and tell the locals and visitors alike that you could
actually catch fish in the local stream and that it was even possible to do it with fly gear.

The chairman of the club mentioned that any costs we made would be covered but I figured
permission to fish in the otherwise off limits mill pool would suffice.
As we where expected to attend late in the afternoon we opted to go fishing first.
Unfortunately on the day we had the event the weather had made an u-turn from balmy late summer
to early fall – on the way to the water it was literally raining cats and dogs added with a strong wind.

We got into our gear amidst the rain and headed past the livingspace of the inhabitants of the mill
who welcomed us as they where en route to church.
My first cast was an instant hit was the pool housed quite a few trout.
Instead of fishing from the bank I opted to wade out in the pool to find a spot out of the wind.
Besides the trout the pool held perch, dace and roach … big ones.

While I was doing pretty well with the trout my friend was into the roach and dace.
For some reason he would just not catch any trout allthough he fished the same spots as I did.

Finally my buddy did catch a trout so the ice was broken as they say.
When the rain stopped curiously the bite did also.
The inhabitants from the mill where in the mean time back from church and offered us coffee
so we sat outside on their patio where they had made a table out of an old mill stone.
The coffee break was a nice interruption in the now slow fishing.
Time was moving fast and soon one of our contacts from the syndicate came out to look for us
and gave us the time and place of the booth we had to man.
There was time though for some more fishing and to my delight I hooked a rather nice brown trout
that had a wonderful golden coloring.

As the pool housed so many trout I figured some might had moved down the outflow into the main stream.
Even though my buddy had fished the spot I wondered if I might still be able to catch fish there.

I pretty soon found out that fish where still there as I caught three dace in a row and hooked
and lost a rainbow trout that was also hiding in the small pool.
The main difference between my setup and that of my buddy was probably that I fished with ligher
tippet and smaller flies.

The increased wind and the rain of the morning had put a lot of foliage of the trees and now the
mill pool was slowly filling up with leaves making fishing difficult.
We had to leave though as we where expected in the village.

My buddy would give casting lessons to the kids and otherwise interested parties while
I answered questions by the public about the local fishing and the gear we used.
The stand was located at the edge of all the festivities so not that many people where stopping at our location but at least
some people where curious enough to ask questions.

I would have taken more pictures of the booth but the current camera I used, a Canon 280HX had some serious malfunctions.
The particular model had a well known error that it would stop to function and display a battery error even when the battery
was full. I just could not get the damn thing working again.

After two hours on the premised we where excused and so we headed back to the mill pool
again where this time my buddy was catching all the trout while I was catching the dace and roach.

The skies had cleared now but it was really blowing.
The water had become a little discolored due to the runoff of the fields and the leaves had massed
into one corner of the mill pool.
Dace where now feeding full in the surface picking up debris in the surface film.
We tried to fish with dries but all the leaves and foam floating on the water made spotting the fly difficult
if not impossible.
As I had no luck with the trout and tried to catch dace in the shallow end of the pool and that worked
pretty well.

When I hooked a small dace I got some surprising visitors, two very big perch wanted to grab the
dace but turned away at the last minute as they saw me.
I quickly changed my setup and fished a small streamer across the mill pool in the hope to catch one
of those lunker perch.
I did get strikes but the only fish I caught was a small brown trout.

The sun was setting and the temperature had dropped notably from what it was in the
early morning.
My buddy was still eagerly fishing the pond as one big rainbow trout had been feeding
in the surface near his position.
He could not get the fish to eat the fly though, I guess he spotted that I was ready to get something to eat.

Fish where off the feed anyway and as the light diminished and the temperature would
drop even further fishing would not improve.
We said goodbye to the inhabitants of the mill and their guard dog and headed to the pub for dinner
to end the day in the style.
The two hours we spend at the village where worth it as we spend most of the day fishing. 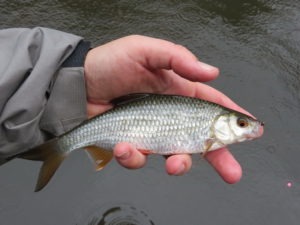 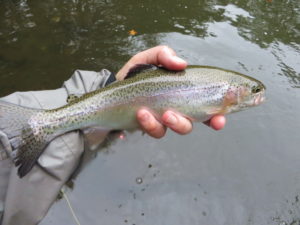 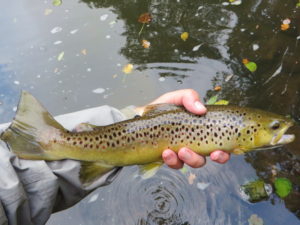 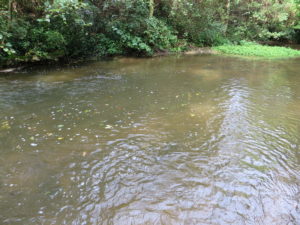 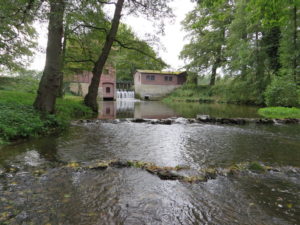 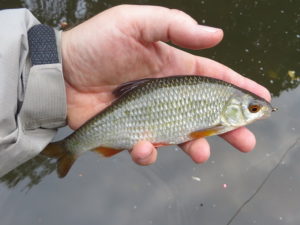 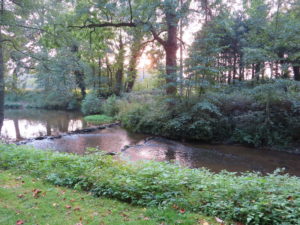 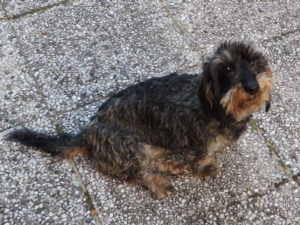