Last chance to get a pike this year so I fished a stream on the border.
Pretty strong flow but good visibility.
The shortcut through the preserve meant dealing with the highlanders but luckily they did not seem that bothered by my presence.

Managed to hook two pike but on both the hook did not stick so I am afraid I was skunked again.
Then again it was a huge improvement over the session before when I did not see any action at all. That pike will come next year.
Fishing for this year is done so all left to do is wishing everybody all the best for the upcoming year.

With the end of the year in sight it was time for our traditional venue to close of the flyfishing year,
the so called “oliebol snoeken”.
Where “oliebol” stood for the deep fried raisin bun, a traditional end of the year treat in the Netherlands.
With “snoeken” pike fishing was meant.

The location for this year was a polder, a piece of low lying reclaimed land littered with small canals
and ditches used to drain the land by means of pumping stations.
It was cold in the morning, temperature below freezing and a bleak sun in the sky.
As it was freezing the guides would ice up so from time to time you had to dislodge the buildup ice.
The visibility was very poor, it had a coffee color which dimmed my hopes for catching anything.

After a few hours fishing the results were pretty meager.
Tom had a strike of a pike but missed the fish, he did notice some baitfish around.
I had seen not any activity of fish, the rest of the guys also with no hits.
The lack of visibility in the water bothered us so we went looking for cleaner water.
In the end we found a  nice wide canal that had a dark tannic color but with some visibility in it.
It did not take long before Tom hooked the first pike of the day.

Hopes where raised and we did our best to imitate Tom but alas to no avail.
After walking a mile or so along the canal making various casts into the middle of the canal
and along the shore line I had nothing to show for.
In the mean time the rest of the guys had doubled back to the first location of the morning but soon came back as it still was no good.

When the guys came back Tom asked me if I had seen anything moving and well I had.
In the same spot where Tom landed his first fish I had seen some fish moving but tossing in a streamer did not yield a strike for me.
Tom started to fish the same stretch and behold within a short while he hooked another pike.
It got worse .. at least for us … soon Tom caught pike number three.

With the sun going under and the temperature back to freezing we called it a day.
Off course the phrase “Dumb farmers grow the biggest potatoes” came up but in the end it was clear that we where useless and Tom could fish … simple as that.
We end the day at the pancake house nearby for a proper ending of the fishing year, kudos to Tom … surely our pike whisperer. 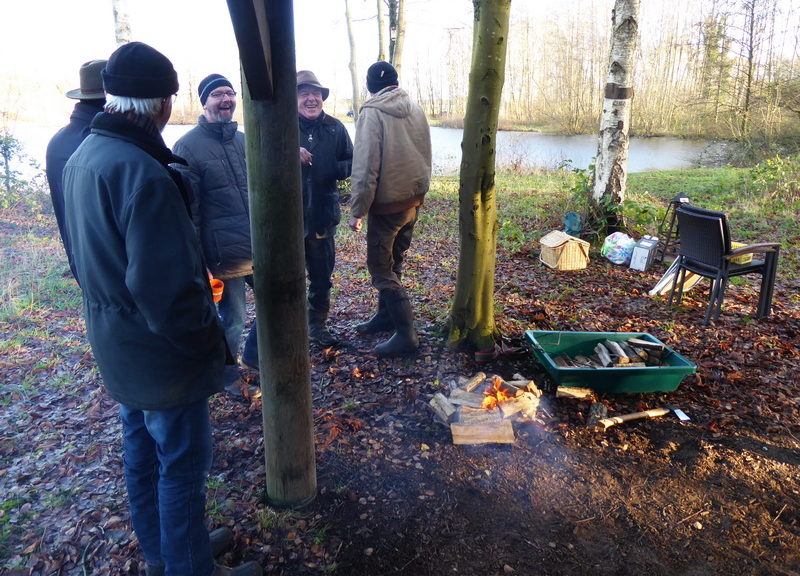 Another week with again lots of rain and wind.
On Saturday I visited one of my sure shot perch spots in the Netherlands hoping to catch a large perch.
It was very windy, chilly but dry when I arrived at the canal in the afternoon.

I wanted to test a WF4 sink-tip line and soon found out that I did not get the fly fast enough to the required depth.
I finally ended up exchanging the floating leader with a fast sinking poly leader and a weighted streamer.

The canal was ultra-clear as it was each fall / winter and I could see the fly from quite a distance moving in the water
… just the fish where missing in the picture.
With the perch it was always important to find them as they usually on the move.

Eventually I found them and could see several big striped fish following my streamer … but they always stayed
a few inches behind the fly and did not strike.
I tried for them until sunset but with the light fading and rain pouring I soon called it a day … skunked again.

Sunday was not planned as a fishing day, but I took my flyrod with me anyway.
It was time for the annual Christmas casting meeting with the German fly fishermen on the other side of the border.
A social meeting with smoked salmon and certain Scottish drinks at a pond near the river I usually fish.

As usual we had a good time and interesting fishing information was exchanged.
I left in the afternoon as I still had the intension to fish the river but when I saw the state I noticed that the water was even
higher than last week and that the stirred up silt and leaves would make fishing impossible.

Off course it was not a total waste as there still was the pub.
I was informed beforehand that the special of the day was the Goulash soup with a side order of choice
plus a salad with cream dressing.
I choose as side order Spätzle, egg noodles usually a dish in Southern Germany.

This dish was very good and thus my plate was empty quickly which prompted the landlady to give me an additional bowl of that delicious Goulash soup.
For dessert I was given the opportunity to taste a new dish with ice cream and well it was nothing short of excellent, vanilla ice cream with a sauce of peach and mango ….
Not a bad day at all. 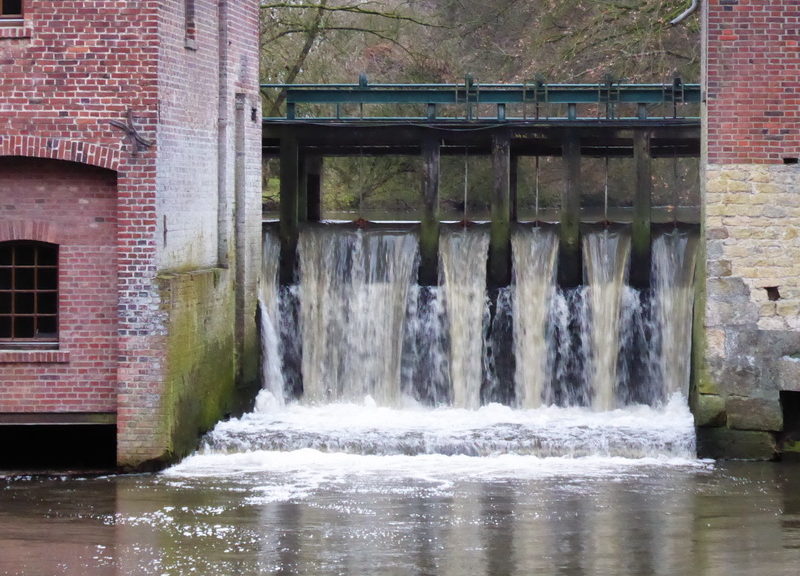 I had to visit the pub as I ordered some stuff from the local distillery.
Since I passed the stream anyway I figured some fishing might be in order.
After a record dry summer fall and the start of winter had been wet.
This was good for the groundwater table, not for fishing.

The stream had a coffee color and pushed a lot of water.
I tried my luck and fished in the calmer water hoping for some bites.
It actually worked so I did not have to end my day fishless.

I ended the day at the pub already outfitted with Christmas decorations.