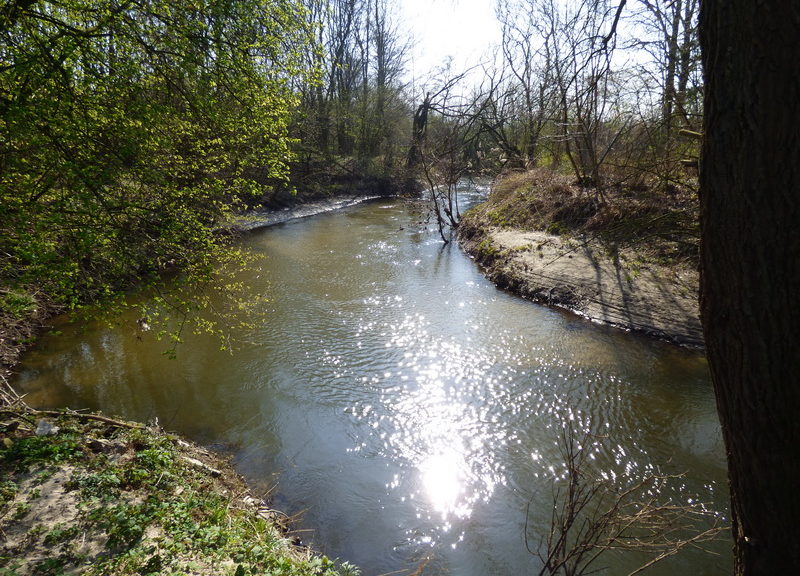 The last time I crossed the border was two weeks ago.
My fear of a closed border came not through.
Restrictions where in set in place though.

I decided to fish the river as the last day of fair weather was upon.
A week of sunny clear skies would come to an end.
Instead colder weather with the mention of frost and snow would roll in.
The first mark yielded some bites but no solid hookups.
I hoped to encounter a brown trout but could not find any.

I did spot dace in the surface further upstream though.
The dace at times would pick up items from the surface.
I switched to a dry fly and got a few takes which I missed.
The strong wind caused waves upon the normal calm stream.
The dace where staying deep due to the wind.

I fished several of my hot spots but all where pretty void of fish.
A tree lined bank was the last hope to catch any fish.
The roots of the trees usually held some fish.
Fishing a nymph close to those roots yielded a nice dace.

I fished inside the village and wondered about many people around.
Too many people gathering and too close to each other.
I gave me an uncanny feeling so I moved to a quieter place.
A spot in the deserted forest seemed safer to fish.
Weeks of rain had displaced a lot of sand in the stream.
I saw the bottom well, I could spot no fish though.

I checked out the time for sunset and made my way back home.
In the morning I had biked 30 km due SW against a steady E head wind.
At the end of the day the wind had switch to NNW which so a head wind on the return trip.
I was cold despite having extra layers of clothing due to the wind chill.
I arrived home and was pretty beaten.
Good to be outside again in these strange times. 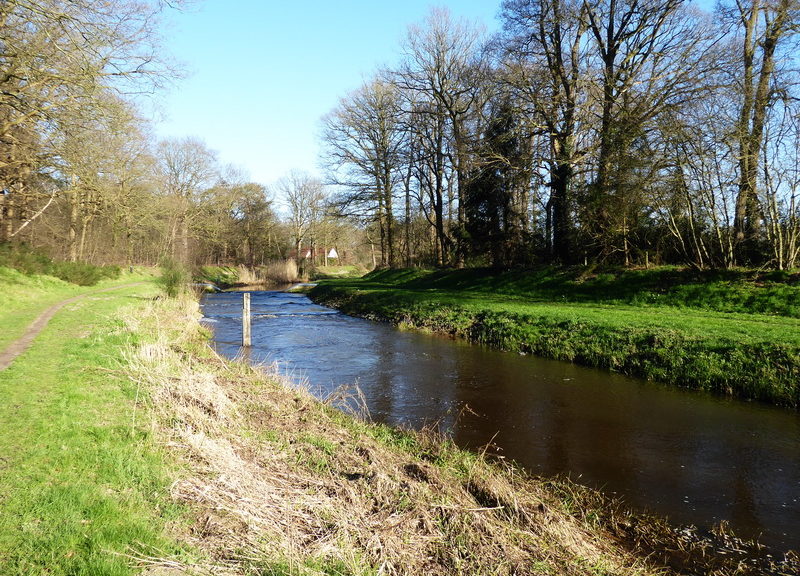 As a master of social distancing I slipped out for a few hours to check out the local stream.
Took the back roads and a path that was just across the border to reach my fishing spot.

The stream fishes bad in early spring and with a frosty morning and a steadily blowing east wind my hopes for finding fish where not that great.
It was a short session so I choose a spot where I had lost two pike the last time I visited the stream.
The water was high and quite dirty but I figured clear enough for any predator to strike the fly.

I tried for a couple of hours but nothing moved.
Plan B was to get a dace or roach by drifting a nymph deep along the bottom but that also failed to haul in any fish.
Still nice to be in the fresh air for a while. 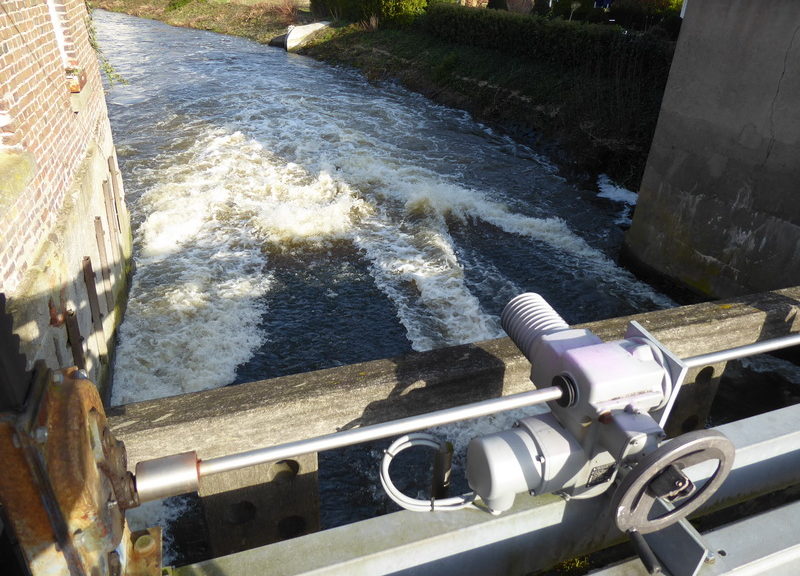 I decided to make a quick dash over the border into Germany.
The river pushed a lot of water but it was dropping as you could see from
the sediment on the banks.

Today I had my priorities sorted so I headed for the pub first.
Just as I was zipping my second wheat beer the major called and asked the owner to shut the place down.
He declined because voluntarily shutting down meant no compensation.
I was thus able to order the Mexico burger, a new dish for the upcoming season. As it should be the burger was hot.. jalapeño’s.
Had to extinguish the fire with some more wheat beer.
Since it could be my last visit I had the double cheesecake with cream as desert.

Even though it seemed hopeless I still went fishing.
The choice of spots was limited as this brown soup was virtually unfishable.
The first spot yielded no fish but the second spot had actually fish moving about.
Just as I thought my nymph was stuck to the bottom the bottom moved and I just caught a glimpse of a dace.

Further casts as the same spot yielded a small dace and a roach.
As usual my hip waders where to short so I ended up with wet feet again.
I made it back over the border in time as public life around was about to shut down completely.
Borders closed down … public places like pubs as from now mandatory closed. 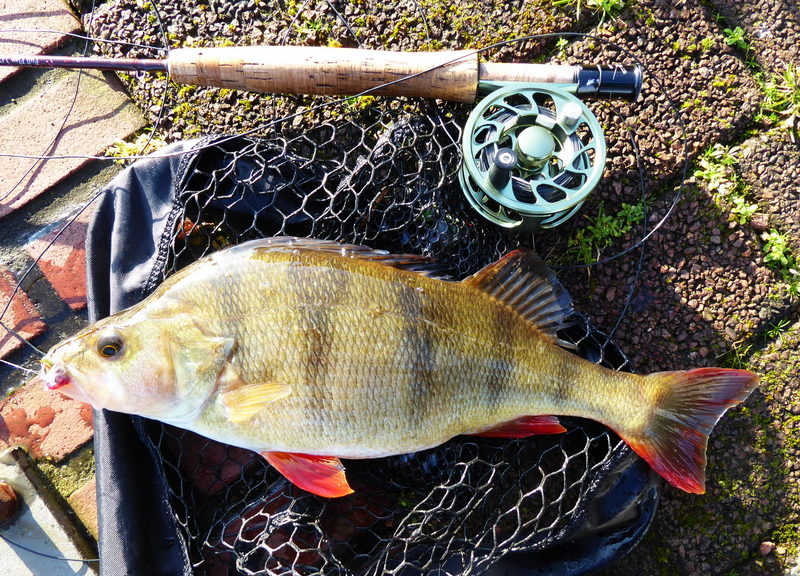 I had hoped the rains would stop so my favorite stream would be fishable again but last Thursday and Friday the skies opened again.
The river was up in flooding stage in no-time so I tried another canal session at my side of the border.

Goal for today was to catch a perch.
The last two sessions at the canal remained fruitless, I came no further than hooking a fish.
Today I finally had a solid take of a good perch and was able to land it.
I noticed that the water was not as clear as usual so that might have helped.

I probed the canal thoroughly but had just one good hit.
It was a short session which I ended at the junction of an old canal to the harbor.
Nothing much moving until a pike tried to nail the polar minnow I fished.

The pike missed the fly but remained in the surface looking for escaped prey. I quickly tossed the fly back in and twitched it a few times resulting in an instant attack.
In hindsight not a wise move as I had only a trout net with me.
So I played the pike hoping to somehow perform a gill grab but the hook came out so all was well. 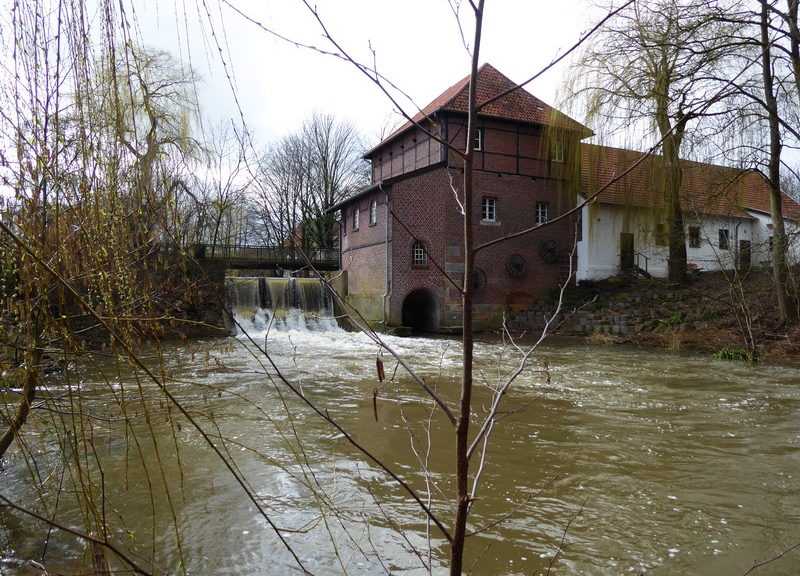 I am happy that the water table has finally reached a decent level after two years of extreme drought.
It would be nice however to have some dry weather for a change.
The river has been not fishable for a month and every weekend a storm is blasting through.

I was a bit too optimistic today to pack the long rod and head to the river. Even at the watermill all gates of the weir where still pulled.
I went to the pub in a straight line and tested a new burger instead of going fishing.

Off course I could not leave without trying so I entered the muddy waters and tossed a heavy nymph in the water hoping for a take that never came.
Guess I am not the only one waiting for the start of the season.