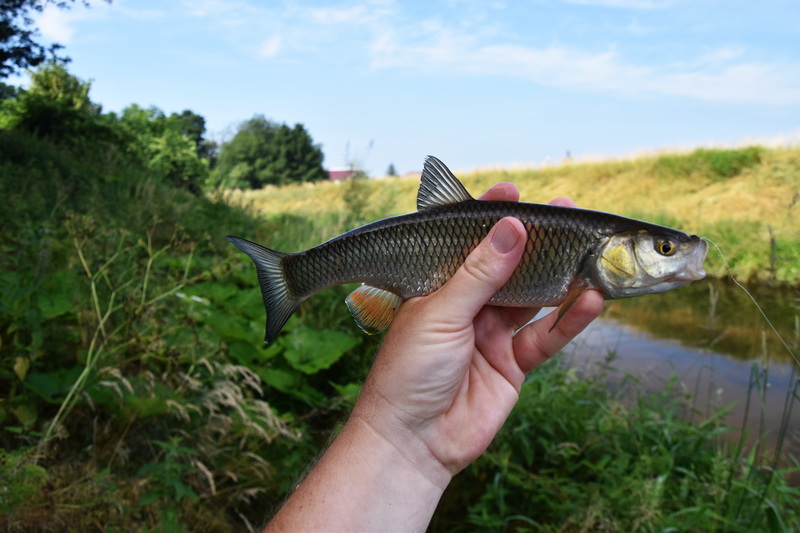 Another hot weekend day thus again on the quest for a big chub.
This time I tried again at the home waters but I had difficulty finding fish.
Again the banks still overgrown so there was hardly an open space to
find to reach the water.

The feeder stream had visible fish and indeed some of the big boys.
The big mayfly did not work so I downsized to a crane fly pattern.
The cranefly did work as long as it hit the water, free drifting and the fish
showed no interest.
I got two of the smaller fish relatively fast,

I spotted again a pike along the bank, it had seen me first though and
retreated to deeper water.
Further upstream I noticed the big chub and I made a good cast near
them without scaring any fish.
One came up and nailed the fly, I battled the fish successfully but just
before I could net it the fish got off.

Back on the main river I battled the long grass and countless horse flies
to find any fish.
It was really hot and access to the water was virtually impossible due
to the tall grass.
I spotted a few fish moving but not the stationary feeding fish I wanted.
In the mean time the storks where circling overhead, a sign of summer.

I tried the feeder stream on the way back but in the late afternoon all
activity ceased.
Last stop off course the pub, as the clouds gathered and rain and thunder
where predicted I opted to sit inside.

As starters I ordered the Manta platte, a curry sausage with fries.
Next was the salad with baked feta cheese.
Skipped the desert as I was stuffed.
The beer garden had plenty of visitors, amongst them pagans who
ordered the strawberry beer .. beer with strawberry sirup and strawberries
(lady drink).
I made a picture of it otherwise you would not believe what savagery goes
on at this side of the pond.