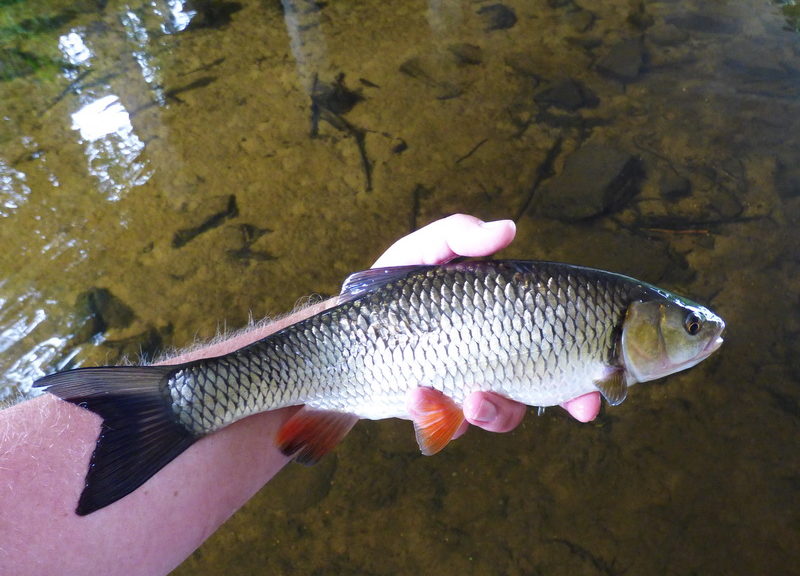 Despite the temperature drop and the heavy cloud cover I opted to fish the chub spots today.
On arrival my favorite haunt was void of large fish but the feeder stream boasted six large chub.
Just as last time those chub would not look at any fly I presented so I headed on to greener pastures.

A view from the bridge revealed medium chub moving about so my hopes where high.
The problem I faced was that I just could not get close to the fish.
The fish spotted me in the low clear water and made a run for it.

The large mayfly did not attract any fish so I tried the hopper again.
The hopper either scared the fish off or they would carefully move under it and inspect the fly.
I noticed a large chub moving under the bank I was walking on.
As it did not run I figured I might try to catch that fish.
I was obscured from the fish by huge nettles and the steep bank.
My tactic was to land the hopper with a splash in the water.
The second time I did that the chub came out of its lair and hit the fly.

Now I had a big chub on and it immediately rushed into the aquatic plants and got stuck.
I figured my thigh waders might be to short judging the depth but I had to get in anway.
My waders filled with water as expected but now I could coax the fish out of the weeds.
I forgot about the fact that the hopper was barbless and in that moment of slack line before netting the fly came out … bummer.
The banks where so steep that I could not climb out and so the only way was to wade to the nearby gauge station and climb the service steps.

I drained my waders and pondered what to do next.
Fish count of the day was one tiny chub on the nymph and that was not satisfactory.
Other spots I tried had a lot of chub present but again no eaters.
When I arrived at the final spot of the day it was already pretty late.
Again fish where present and some took a close look at the hopper.
The last cast of the day yielded an instant hit.
As soon as the fly landed on the water and it was gone …
The fish ran in the plants but I could get it out without going for a swim.
Mission accomplished…