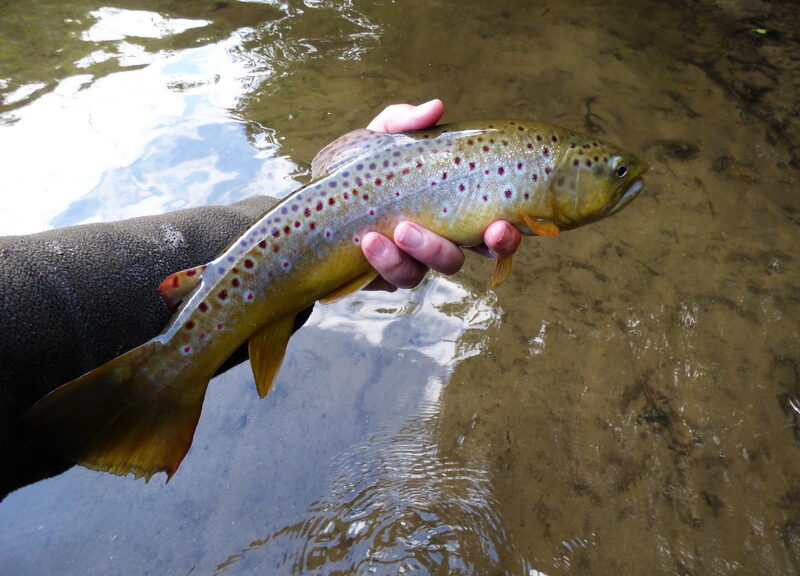 Another week, another weather type.
The hot and dry weather changed to wet, cold and windy.
I felt a little underdressed in the morning as it was quite chilly.

The rain of the past week had caused the water of the stream to rise.
Visibility was limited and with the clouds, winds and temperature
fish activity was non-existent.

During the first couple of hours only a few roach fell victim to the perdigon.
I moved to a sheltered spot of the stream where my friends had
failed to catch the resident trout during last weeks session.
A deep fished perdigon was the ticket for the first trout of the day.

In the afternoon I went to the pub where the beer garden was empty … Too windy and chilly for the towns folk.
I was fearing the pub would be closed due to the weather but I smelled
the fireplace so I went in.
I had lunch and warmed up at the fireplace before I went out again.

I had hoped for some rays of sun and mayfly activity later in the day.
Mayflies where indeed about and some fish where rising.
I went to a shallow section where I had seen trout last week.
En route I spotted a big trout from the high bank in shallow water.

Every time I would peek over the edge of the bank it would scoot off.
Very difficult to get at due to tree cover and shallow water but
worth a try on the way back.
The shallows yielded one solid hookup from a trout but not solid enough as the trout came off.

I noticed more than one trout when I waded out the pool but I would leave that for another time.
The big trout was now a target for me.
I sneaked up to the trout from downstream I saw that it was stationary
waiting to pick up mayflies.

The challenge was that overhanging branches from a willow would make
it very tough to land a fly near the fly.
I failed at the first attempts either catching the shrubs behind me or
falling short in distance.

I persevered and finally landed the fly next to the trout.
A little twitch and the trout noticed the fly and came to intercept it.
I set the hook and used maximum force to keep the trout out of
the treeroots near the bank.
A good end of the day with the best en prettiest trout of the season so far.