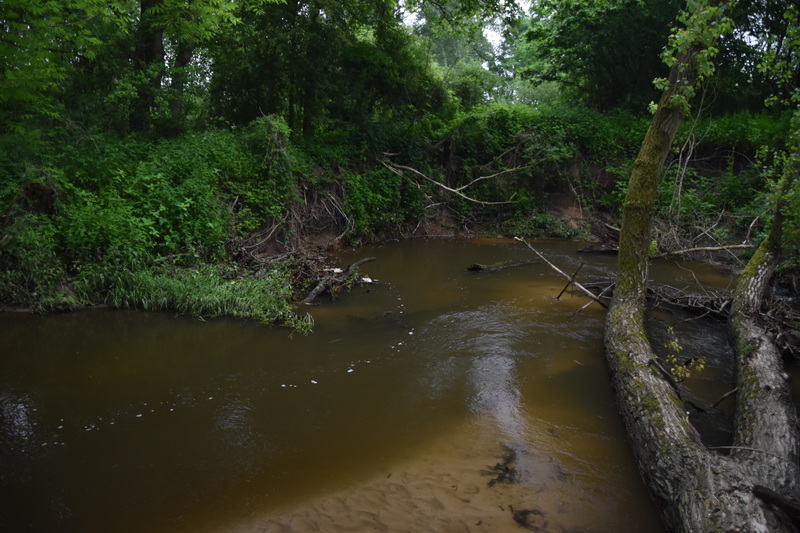 Before the weekend summer storms brought lots of rain to certain local areas.
I skipped fishing Saturday as the stream was blown out.
I watched the river gage carefully during the weekend and figured on Sunday
conditions might be fishable.

I went out early to beat the crowds at my first spot of the day.
The water was dirty and flow was fast but I had confidence I would catch something.
Last week yielded some nice trout and I hoped to get a few more.

With the low visibility the weapon of choice was the squirmy but I hardly got hits.
I probed the deeper spots but could only scrap a few fish together.
With heavy cloud cover insects activity was minimal.
Nevertheless I noticed some small dace rising to the few insects that where around.

I also spotted a few big mayflies and hoped trout would go for them but it did not happen.
The spots that yielded the trout last week did not produce fish either.
I took a break midday at the water’s edge and sat down on an old deadfall.
I failed to notice how rotten it was, before I knew it the deadfall gave way and I
landed several feet lower in the stream.

Luckily only my ego was bruised and all equipment though wet survived without
any damage.
I however looked like a pig, dirt everywhere and the waders filled to the brim.
I dried out the gear as best as I could, cleaned up and headed up the nearby hill
in order to dry out.

That hill was the first major high point to the east.
It housed not only a communication tower but also a derelict missile base from
the good old days (detachment of Dutch Airforce and an US army artillery).
I nested onto a bench on top of the hill and the wind dried out my wet clothes.

When I finally found myself presentable enough I went on my way and made a short
stop at the new pond of our local fishing club.
One of the members was feeding the fish and I watched the roach and grass carp
go berserk, alas not open for fishing yet until further notice.

I continued my trek and eventually landed at the beer garden where I met up
with my fellow club member.
The cloudy weather had scared the crowds off so I could pick any seating I wanted.
This was the first week when the full menu was available so I got the tasty Parmesano burger
with as desert a piece of cheese cake, good days.