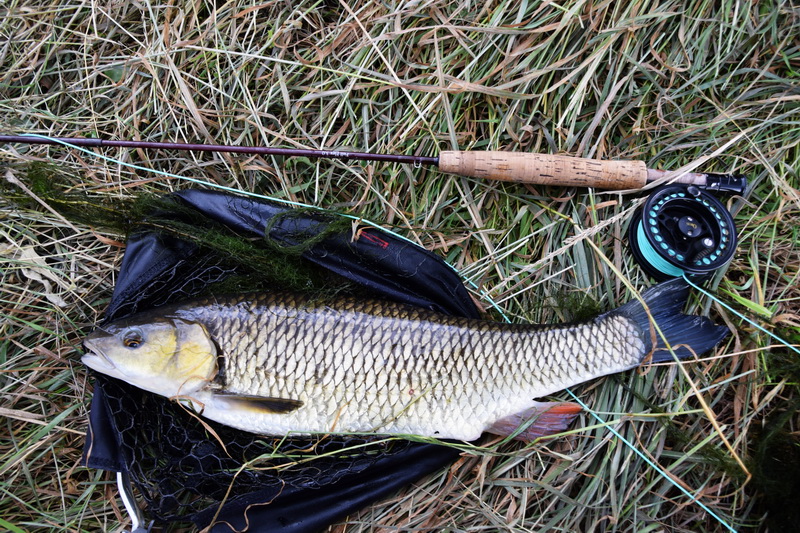 I left for the stream just as the sun was appearing in the sky.
The weather forecast was questionable but early morning started with patches of fog and a clear sky.

Fall was here, crisp mornings with fog and still the possibility of warm afternoons.
With the sun low in the sky I could not really have a good look in the water and thus had difficulty with spotting fish.
I scared the fish off before I could make casts with only on one occasion a fish that took a look at the large dry fly twice before rejecting it.

With time the sun came higher but also clouds appeared and the wind picked up messing up my chances for sight fishing.
A small sedge yielded a small chub so at least I did not blank.
The spot I fished was clearly not yielded any fish so I headed to a feeder stream where surprisingly the fish where absent.

With some luck I got two larger fish but still not the size I wanted, fish in the 40 to 50cm range.
It was late afternoon when I tried my last spot which frankly had not been good to me this season.
Again the lack of sunshine made spotting fish virtually impossible with the fish seeing me first and running for cover.

I was lucky that I spotted the orange fins of a large chub upstream from me close to the bank, I noticed in fact two large chub.
I could not place the large mayfly under the bank from my position but I did manage to toss the fly near to the fish.

The fly was close enough to make both fish turn and one of them gobbled up the mayfly without any hesitation.
I kept my cool and struck at the right moment resulting in the landing of
an 48cm long chub on the 4-weight.