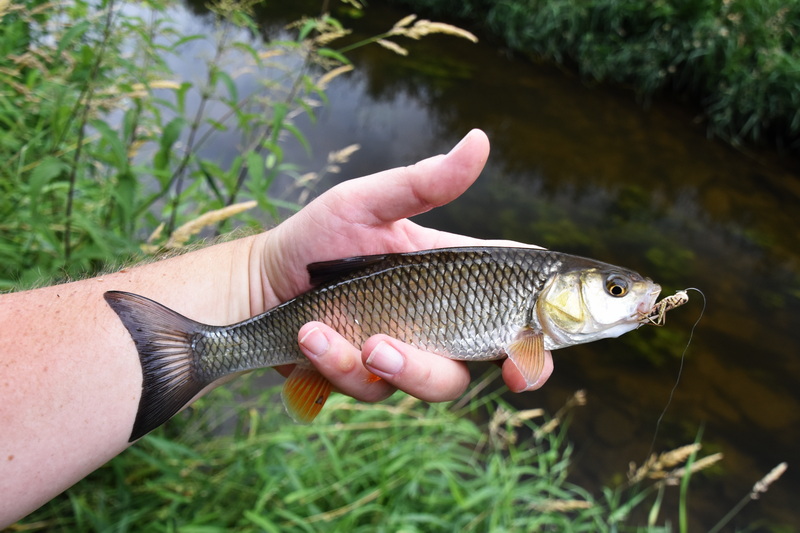 Last Saturday was predicted a 100 percent rain day by the weather guru’s.
It actually stayed dry all day and I even got a tan in the end.
Once again I tried to fool the chub and even had some new weapons in my armory.
Besides the large abstract hoppers I usually fished I decided to try a more natural and
smaller pattern hoping to fool the wary fish.

It was tough again to even get to the water which was btw very murky.
This summer is completely different than last one, unstable weather with a
constant supply of water.
The water just was not as clear as last summer.

I tried some of the known spots and noticed a few fish in the murky water.
The first reaction to the new hopper where promising as it was instantly attacked.
After a few missed bites and one hooked it went quiet … fish gone.
The other spot on the main stream remained fishless.

Next stop the feed, it was clear and had fish in it.
Also big ones but I only nailed one slightly larger fish.
The problem here was the extreme shallow water, dumping a hopper usually meant
all the fish took off.
Noticed one pike in the water but without the proper streamer it was no use trying,
lots of weed in the water with no real depth to make a long retrieve.

With the fish not cooperating I did some sightseeing and took the long road to the pub.
Went for the double cheeseburger this time.

On Sunday I tried the home stretch hoping to find a trout but I hardly found any fish.
The squirmy yielded a small dace from one of the pools and that was it,
The only thing hitting the squirmy where the gudgeons, small bottom feeders that
constantly grabbed the tail section of the squirmy,

I tried some other places but the water was shallow, found a few small dace and
fished a small dun pattern to get some bites.
The pub visit was early as I had hoped that I would find fish surface feeding
in the nearby village.
Alas the surface waters where void of feeding fish, a small pink Perdigon yielded one
roach and that was it.

A cloudy day with some of the clouds looking like thunder heads, it stayed dry though.
Maybe it is time to visit some of the spots that are more off track in order to find fish.