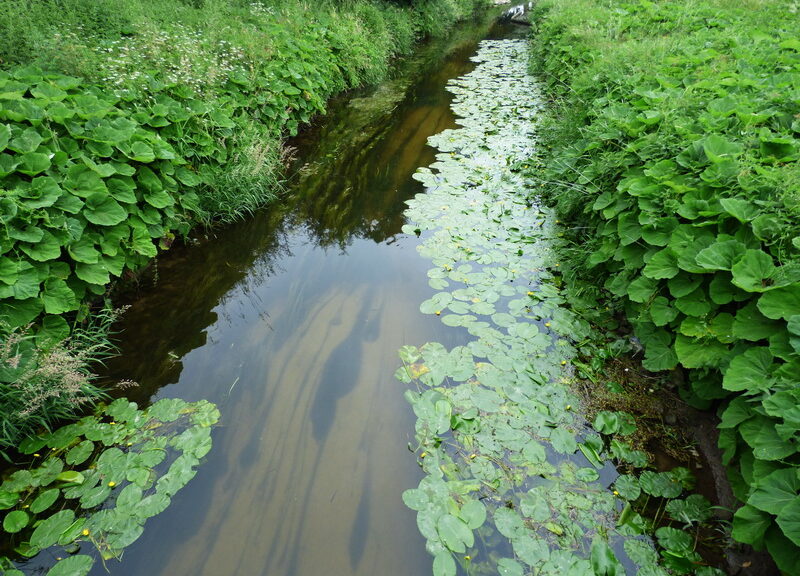 I skipped the visit to the chub section last time due to the weather.
Now the skies where an even gray so I figured I might try again.
I spotted some big ones from an old railroad bridge.
I opted to move for a spot with easier access where I noticed
a whole army of smaller chub.
It looked like easy pickings but boy the fish where tough.

At other spots I ran into trouble reaching the waters edge or spotting fish.
The banks had not been mowed and the grass stood four to five feet tall.
Walking along the banks in the sticky heat proved to be a pain.
The big fish where there though.
I spotted three of them lying in the bend of the stream.

I struggled as my short rod was not exactly suited to contend with the high grass on the back cast.
When I finally had a good shot at the chub a gust of wind threw the fly off course and the chubs scattered.

In the mean time the sun appeared through the cloud cover and it got even hotter and muggier than before.
Something big was brewing in the sky and when the wind suddenly got stronger and a storm formed I had to make big tracks.

The goal was to reach the pub before the skies opened, alas it was 12 miles away.
I was on my bike – the new electric assisted one so I notched the power setting up and tried to get as fast as possible to my destination.

It was a close call when I entered the dirt road near the pub.
I noticed a car with Dutch plates and heard my friends stumbling in the forest next to the river.
They had also noticed that somebody had turned out the lights.
As we entered the pub the heavenly sluice gates opened.

I had to leave the sanctuary of the pub eventually.
I reached the outskirts of the city after 2 hours of headwind and continuous rain.
Then my battery died … that last mile was tough.