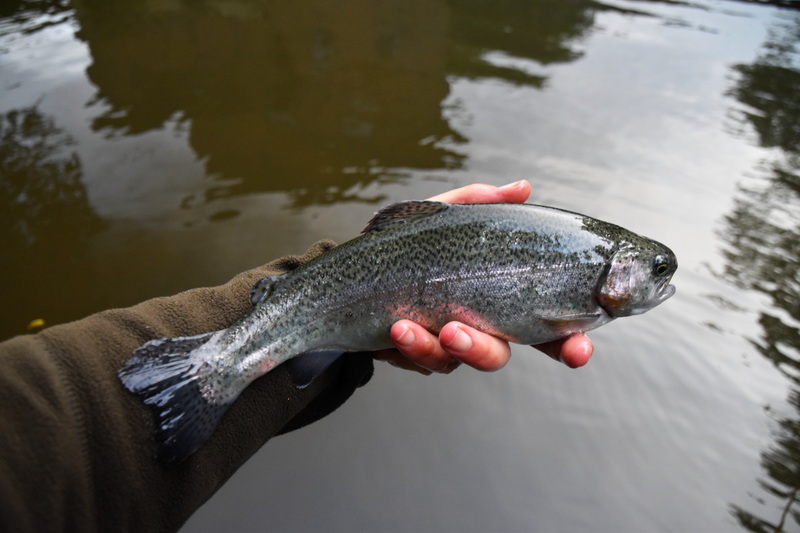 September used to be the month for the annual fishing contest of the German club.
Last year the venue was skipped due to the pandemic but not this year.
Location was again the mill pool where the owner graciously allowed us access to the premises.

The early morning session on the home waters was a bust.
Shallow water and lots of anglers around where not a recipe for angling bliss.
I had hoped some of the stocked trout had it made out of the pool into the river but I only encountered tiny gudgeons and dace.

After a breakfast held in the big shed at the mill we fished several hours in the mill pool.
The goal was to get five trout, those would be weighed in with any fish the anglers might
had caught during the morning fishing session.
The one with the most fish in weight would be the angler king, crowned with a chain and billed
for the drink.

I fished the flyrod as usual but darn that pool had become really shallow with most fish
being held up in the deepest part just under the mill weir.
I managed three pretty ugly rainbows and lost three others.
After the official part with the crowning of the angler king and the obligatory barbecue I ended
the day in the pub for dinner.

I was pondering if I should get a day ticket for the mill pool as it was open for us members the
next day by means of a special permit.
As it usually it would be a zoo then so I figured I be better off chasing chub.

I was a bit unprepared for the next day … I forget my trusty hopper selection.
When I arrived at the first chub spot I saw plenty of fish but only got two small fish.
Whatever I tried nothing would work.
The weather had not been that friendly also.
The day before the sun sometimes came out and it was warm, now totally overcast skies with wind
and a significantly lower temperature.

I tried the main river but with the lack of sunlight I could not spot the fish or very late.
The only way I spotted fish was when they shot off as they saw me first.
With the knowledge that the chub fishing was not going to happen pub time came early.

Just out of curiosity I checked the mill pool and saw nobody fishing which puzzled me.
Then I got a short bright moment when I remembered that the day before the famous
Applefest was held … all the locals would be drunk at home.
It was not that long before sunset but I quickly arranged a ticket for the pool and started fishing.

Fishing the nymph yielded however no reaction at all … the fish where present though.
I could see the rainbows everywhere moving around.
The squirminator also did not work with the exception of one rainbow from under the weir
that came off during the fight.
It was getting late and I only had caught a small dace, light was fading.
I had not only forgotten the hoppers but also the streamer box which would be my plan B
to catch any trout.
I found one bonefish Clouser in my tackle bag and fished that on a heavier tippet.
The fish where chasing the streamer and I finally landed that trout I was hoping for.
Also jumped five other trout but that Clouser hook was not that sharp.

With the knowledge that the pub would be soon out of the usual day trippers and bikers meaning the kitchen would close down I called it a day.
I was the last guest present that got a warm meal that day, all good.