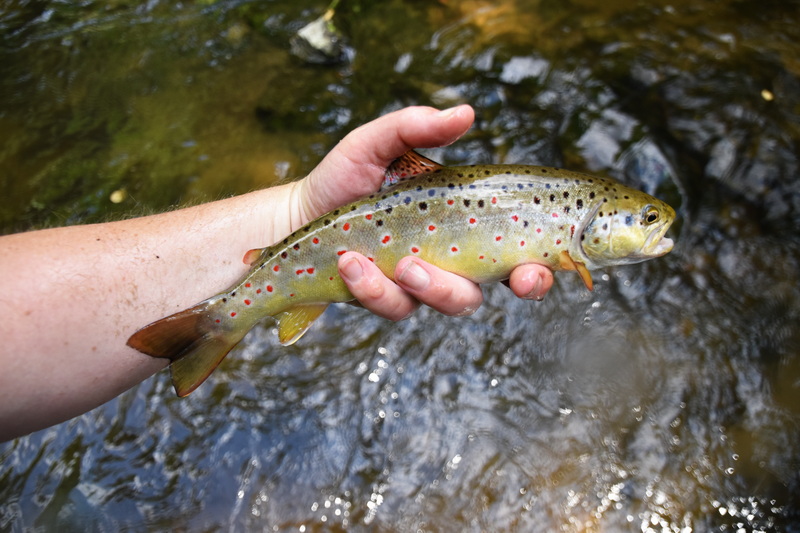 On Saturday I once again went after the chub, there was more activity and I
had shots at two good fish.
The first big chub had no interest whatsoever for the mayfly I was throwing.
The second big chub was in a school amongst small fish at a feeder just
behind some rocks.

The strong current made a good presentation virtually impossible so I
opted to fish with a heavier streamer.
The streamer landed behind the rock and a big chub plus a small one
raced forward to intercept the streamer.
The small chub was first and nailed the fly.

At other spots I saw fish but could not get them to take the fly.
In the afternoon the heat got to me and I went to the main stream
upriver in the forest.
The shade made it more comfortable to fish.
I had two ferocious attacks on the mayfly by a trout but the fish
missed both and did not return later.

The next day I opted to go after the trout but the weather had turned
as a front with rain, wind and lower temperatures passed overnight.
The stream was up and murky but still good enough to fish.
I opted to fish the squirmy and had many hits from the small gudgeons
that where pretty active in the increased flow.

I hooked a good trout but after a long battle it threw the hook before
I could put the net into action.
Nymphing did not work that well so fished a small blue dun pattern with
a foam post and caught several small dace.

I tried the spot where I lost the trout earlier later in the day.
After many fruitless casts with the squirmy and the mayfly I tied on a
heavy perdigon nymph.
Heavy was the way to go as the fly went deep and yielded an attack of
a trout, a different one than the one I had seen earlier.

Before I left for home I tried to get the first trout out of the pool that I
had lost earlier that day.
I decided to fish a small weighted conehead streamer and to my surprise
the trout I was looking for chased the fly a few times.
The fish did not commit so I called it quits and went to the pub for
dinner.