We had been quite lucky with the weather until now as real cold spells that usually killed off the
fishing had been absent for the time being.
As I had not been fishing much this year because of my surgery there was one fish species still
on my to-do list namely chub.

The chub were restricted to the lower reaches of the river I fished due to man-made barriers that
had been in places for ages.
These barriers were slowly removed but until the river is passable for all fish might take a few
years more.

The mission was chub for the day and the temperature was good, namely very high.
It was so high that it was the warmest November day since weather was recorded.
The downside, lots of wind and rain showers.
It had already rained during the week and I was fearing a muddied up river.
At the river the water was pretty clean be it littered with leaves and pushing more water
than I had anticipated.

Before I would be wading I tried a spot near a bridge where I had done quite well in the past.
The current was however too strong to make a decent drift with the nymph along the pilings.
I concentrated on the slack part right at the bank and after two casts the indicator went down
and I was into a good fish.
The fish pulled quite good and tried to dive into the crowfoot but despite the light tippet  I got
it out and landed the fish safely.
It was a chub, a nice fat one so the mission for the day was accomplished.

Now the scary bit came, wading …
The first hurdle was to get safely in the water.
Luckily there was a small gage house fitted with a set of concrete steps into the water.
I got safely down the steps but a bit too deep for my liking, the water was definitely up from
the summer levels when I would normally fish for chub.
The whole point of this wading exercise was to get near to a current seem but the current
was just too strong to get the proper location so I carefully maneuvered back to shore.
Better leave that wading for when the river was low.

I checked out some other spots at the chub section of the river but none looked like they
would produce any fish.
I did take a look at one of the recently removed weirs.
The high dam was now replaced by a series of rock emplacements gradually lowering the the
river.
These collection of stones where spots where trout would take up station in the otherwise featureless made stream.
Since trout season was closed you were not allow not allowed to fish there.

Although I was happy with the chub caught the day was not at an end so I stopped at a junction
in the river further upstream where a small brook entered the stream.
The spot was I had been told good for perch but I could not get any despite using a tasty little
zonker streamer.
I did see some small fry swimming at the junction but they were left in peace.

Strong winds and rain made short work with the last leaves on the trees.
The woods colored from green and yellows to brown now.
One sign of the times where the collection of egrets in one of the fields I
passed, these usually came in late fall winter from their haunts east.

In order to catch more fish I eventually ended up at my home stretch were I
stopped at my roach hotspot.
That hotspot had not fished that well recently and with the now remarkably clear
water I could see why.
The otherwise deep pool had completely been filled with sand.
Fish where active at the willow shrubs that lined the water so a few casts near
them yielded some of the smaller roach.

In one occasion the whole school moved downstream into the shallows so I could
see how many fish there where further upstream in the shrubs.
Action was short though so I moved on.

The next spot was a deeper pool where last week one of the locals was fishing for
a pike he had seen.
I saw big dace feeding in the surface and was frantically searching my tackle bag for
my dry fly box .. which I left at home … sort of hell for flyfishers scenario.
I could not get the surface fish with nymphs so I moved on.

It was late in the day and the light pretty much faded.
A last stop at the outflow of the local mill revealed that fish were still about.
I could not catch them though, small dace where attacking my indicator but the nymph
passed through the water unhindered.
Eventually I got one micro dace on the nymph making the coarse fish grand slam complete.

I made it to the pub at opening time and was the first guest.
While the fire was started up I asked if other guests were expected and well they were.
The local hunters had chosen the pub as their end station for their hunt and the management team
of the local distillery had rented off a section of the pub for them and their guests.
I finished my dinner just as the hunters came streaming in so in time before all the racket would
start, tough fishing day but accomplished the task I set out to do and thus happy. 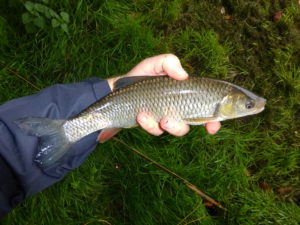 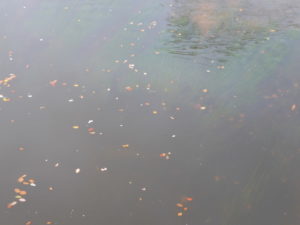 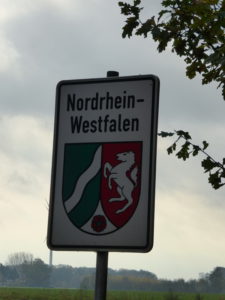 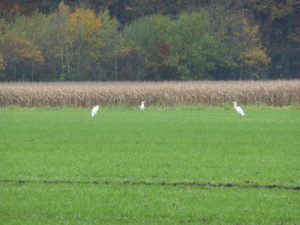 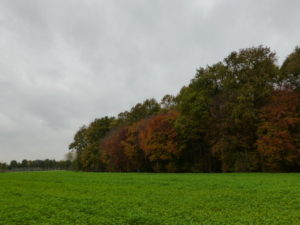 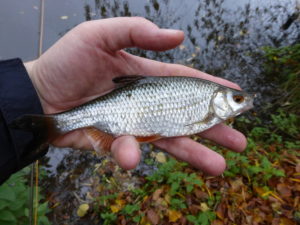 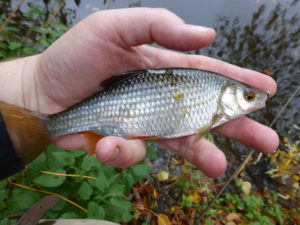 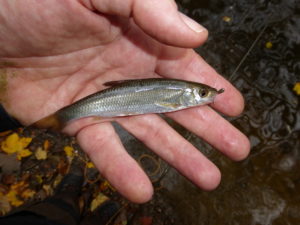 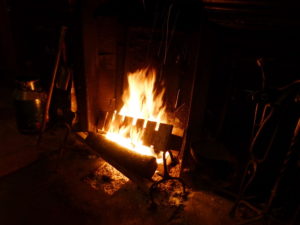