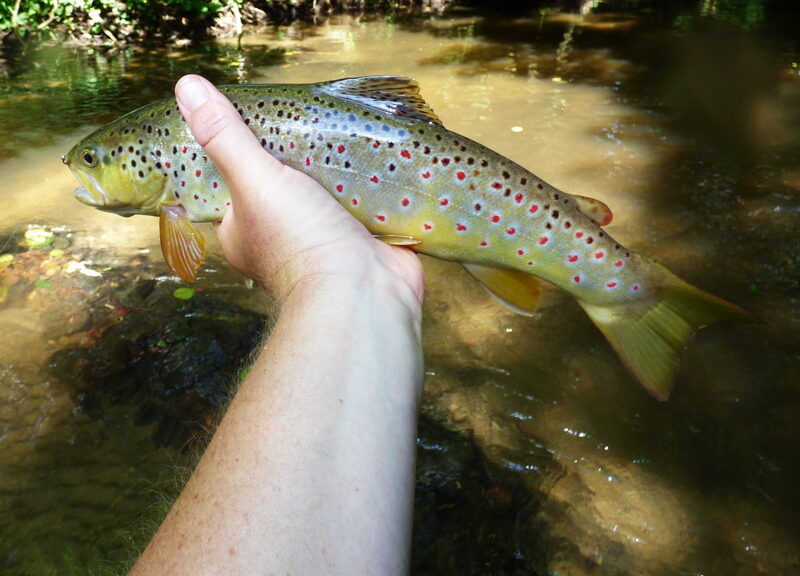 Yesterday I met up with former colleges at the pub in Germany.
The company we worked for had been sold to a big corporation.
The new management ran the whole lot into the ground, we left.

I had some time to spare so I fished the stream in the morning.
Weather wise the rains had stopped at daybreak with the water
slightly up and murky.
It was strange that the perdigon did not draw strikes from shiners.
I hooked a nice trout and then knew why it was so quiet in the pool.

The perdigon did not perform liked I hoped it would.
I had to change to a squirmy worm to get things going again.
Mostly from small bottom feeders that bit the tail but I also managed a trout.
I stalked a larger trout when the skies suddenly darkened.
The rumbling sky above my head made me clear out the water fast.

I went to the pub and just as I was getting out of my waders the skies opened.
It poured but I made it more or less dry into the pub.
It did not take long before my former co workers arrived.
We talked about the old times while having lunch.

Off course I could not resist getting back in the stream after the meetup.
During the downpour the stream had swollen and pushed a lot of dirty water.
The squirmy was a producer due to it’s visibility in the murky water.
All in all a nice day, I cleared the premises around bat time aka sunset.