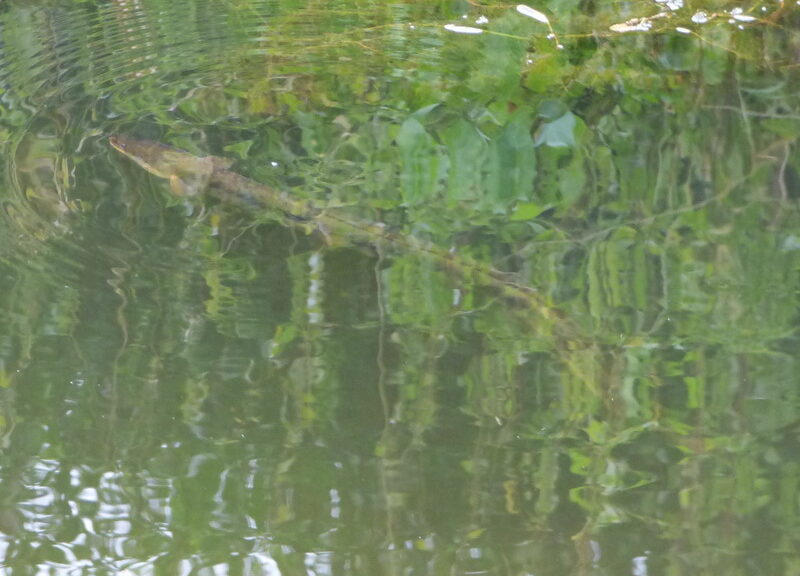 I wondered if moving to the chub section on a day with fog and thick clouds would be a wise move.
On the other hand the low water at the upper reaches of the stream seemed equally a waste of time.

I arrived at the chub haunts and had difficulty spotting fish.
With some luck I managed to catch one chub near the bank who
failed to spot me.
I dropped the fly over the edge of the plants on the shore and got
an instant hookup.

Other fish I spotted ignored my fly all together, to smart to be
fooled by my attempts.
I witnessed the rare sight of an eel moving in the surface and if my
mayfly had not been stuck in the shrubs I would have tossed it in
front of the fish.

When the cloud cover lifted somewhat blue skies appeared, the
sun made it easier to spot fish.
I still struggled to sneak on to the chub which where in ample supply.
Plenty of opportunities but wary fish as expected in a small stream
with low water.

Before I caught fish nr. 2 I had some heart stopping moments when a
big chub hovered under the mayfly I tried to zip it in only to refuse
at the last moment.
I refrained from prematurely striking so I had the chance to target the
other chub nearby that swam upstream.
One cast near that fish was enough to entice a strike.

Time passed quickly and just before I decided to quit I made a second
pass at the fish I had scared off earlier.
Again the bank side vegetation obscured me from the fish and a cast
near the bank yielded fish nr. 3 of the day.

With three fish on the mayfly my day was made and so it was time
for a pub visit.
With temperatures on the low side a vest was required to enjoy the outside dining.
Fall is definitely around the corner.